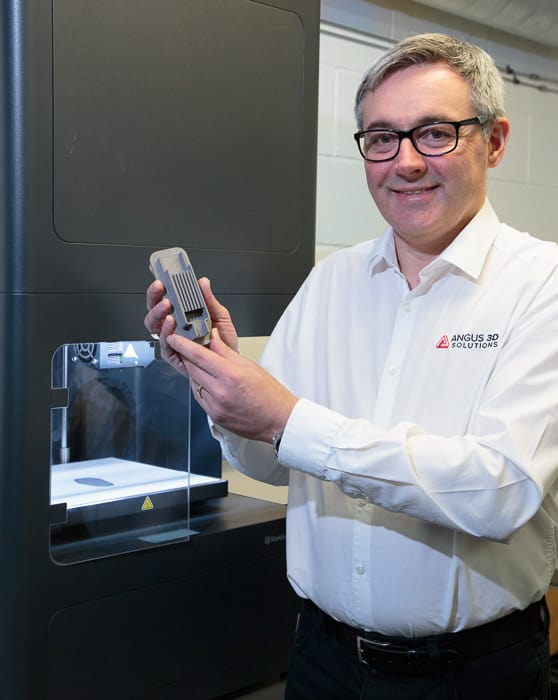 A sector-leading Scots 3D printing start-up is starting to help deliver the up to £1 billion potential benefits to the Scottish economy by producing its first pieces using the UK’s first commercially-available Markforged Metal-X metal printer.

Last year Zero Waste Scotland was so impressed with the presentation global manufacturing veteran Andy Simpson gave it on how additive manufacturing can aid the circular economy that it awarded his company, Angus 3D Solutions, a £175,000 grant from its Circular Economy Investment Fund – part of the Resource Efficient Circular Economy Accelerator Programme, supported by the Scottish Government and the European Regional Development Fund – to buy the world’s most advanced metal printing machine, the Markforged Metal X. It’s believed the only other examples in the UK are owned by Formula One teams and universities, none of which make them available externally.

The Metal-X uses the latest Atomic Diffusion Additive Manufacturing (ADAM) technology – where metal powders are encased in plastic binders and then melted off to create designs previously impossible to manufacture and with unprecedented levels of detail as well as faster and at a fraction of the cost.

Angus 3D’s machine brings new metal printing capabilities to the UK market – as it allows components to be designed and produced in metals such as stainless steel, Inconel, titanium, tool steels, aluminium and copper in 4-5 days, rather than six weeks using traditional methods, and using the same machine. This allows companies to put their latest design into production quicker, accelerating innovation.

The Metal-X can also reduce the weight of traditional manufactured parts while maintaining their strength and performance by producing them with unique geometrics, such as closed-cell honeycomb infill. By printing metal powder in a plastic matrix, the Metal-X also eliminates the safety and environment risks associated with other 3D-printing methods.

Parts printed with the Metal-X are also up to 10 times less expensive than alternative metal-additive technologies and up to 100 times less than traditional fabrication technologies like machining or casting. Materials costs are typically reduced by 98%.

As a result, the Angus 3D’s Metal-X is ideal for parts that can’t be manufactured using traditional methods in industries such as aerospace, medical, oil and gas and general manufacturing.

The Metal-X 3D print system is also the first end-to-end manufacturing solution – providing everything needed to go from design to fully-functional metal parts.

So far Angus 3D has used the Metal-X to print lightweight custom parts for a bicycle business and components for a new product design for an oil & gas company as well as remanufacture obsolete components for a local textile manufacturer to help maintain production and reduce breakdowns. It’s also producing test pieces for an F1 team looking for help carrying out performance analysis on parts.

The majority of the parts being made with the Metal-X so far are for companies in Scotland, but Angus 3D has already seen an increase in enquiries from companies in England due to their Metal-X being the only one commercially-available in the UK.

Angus 3D Solutions’ grant was one of three cited by First Minister Nicola Sturgeon at the Zero Waste Scotland Circular Economy Hotspot Scotland event last October as being part of a programme which could unlock up to £1 billion potential value in the economies of Aberdeen, Aberdeenshire and Tayside by boosting the circular economy according to reports commissioned by Zero Waste Scotland.

A circular economy is a greener alternative to the traditional linear economy – where we make, use and dispose of items – in which we keep precious resources in use for as long as possible. The benefits include: creating opportunities for growth; reducing manufacturing waste; higher resource productivity; a more competitive economy; reducing the environmental impacts of production and consumption and positioning Scotland better to address emerging global resource security and scarcity.

Angus 3D’s Metal-X will further advance the circular economy by allowing parts which would previously have been scrapped due to obsolescence to be put back in service through reverse-engineering – where their design is replicated using a 3D scanner and then printed using the Metal-X. It also improves the benefit to the circular economy by using less resources in the process.

For example, an oil and gas company which had been scrapping electrical connections due to minor parts no longer being available is now having the parts reverse-engineered and remanufactured by Angus 3D, allowing the connectors to be put back in service, saving nearly £20,000.

Speaking about the development, Andy Simpson said: “I’m naturally delighted to get this world-leading piece of kit into production as it will help our clients and Scotland’s manufacturing industry develop the circular economy.

“Scotland has an impressive manufacturing history. To maintain and further develop this we must embrace the latest additive manufacturing technology and make it accessible as well as encourage the next generation to look at manufacturing as a career choice.

“We’re doing this by bringing the latest additive manufacturing technology to Scotland and the UK and making it accessible to all industries and individuals. This machine enables us to better support inventors, designers, SMEs and manufacturers in Scotland and beyond.”